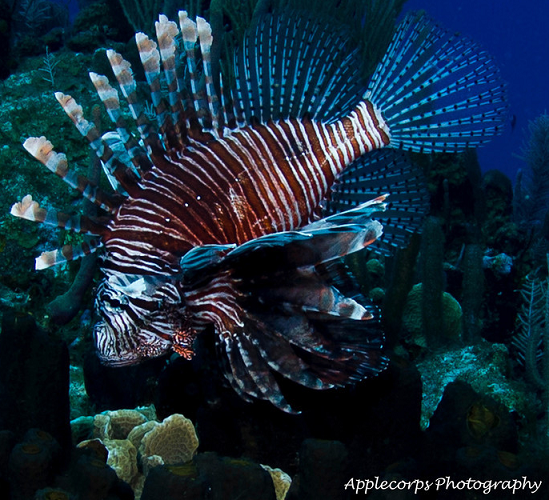 If you haven’t already heard, the Lionfish is taking over the Atlantic reefs from Bermuda to the Mid-Atlantic, through the Bahamas, Florida Keys, and down the Caribbean all the way to its southernmost parts, including the entire Gulf of Mexio. With no natural predators this voracious eater of reef fish is propagating at previously unheard of rates. In just a few short years, the Lionfish has gone from rare sightings to crazy plentiful. The deceptively beautiful lionfish is a hazard to our marine ecosystem because they are eating large numbers of native juvenile fish. Some have even been opened up with 15-20 juveniles inside their stomach at one time. Unlike the Indo-Pacific lionfish which mate seasonally, these Atlantic lionfish are breeding year round, inhabiting a larger portion of the reefs, and are even growing to slightly larger sizes. Countries like Bermuda, the Bahamas, the Virgin Islands, and the Turks and Caicos are holding Lionfish tournaments in an attempt to reduce their population.

We now know that divers are having an impact in keeping the lionfish population at bay. In areas where divers rarely venture, as many as 30 or more lionfish are often spotted in a single dive, while on the routinely hunted areas people are keeping the population to only a few lionfish sighted per dive. We may not be able to eliminate the Lionfish in the Atlantic, but if we can limit the population on our shallow divable reefs than we can give our native juvenile fish a fighting chance at survival. Throughout Florida and the Caribbean, an aggressive campaign to enlighten people to the delicious taste and texture of the Lionfish is underway, and all are encouraged to spear the Lionfish whenever possible. Creating a viable commercial market for Lionfish may be the answer to controlling their population.

-Lionfish can inflict a painful, agonizing sting or stab from any of their 13 dorsal, 3 anal, or 2 pelvic spines. The spines are defensive only and are not used in hunting. The potent venom is contained in venomous glandular tissue that is located in the grooves of the spines. When a spine enters a victim the tissue is torn and the venom diffuses into the wound. The venom includes a protein, a neuromuscular toxin and a neurotransmitter called acetylcholine. How people react to the stings depends on the amount of venom in the wound, the immune system of the victim, and the location of the sting.

-The best treatment is to immerse the wound site in hot, non-scalding water (110-113°F) for 20 to 30 minutes, or until the pain subsides. The key point is heat; lionfish venom contains many heat labile proteins, and heat will denature these venom proteins, preventing them from spreading in the bloodstream and decreasing the severity of their effects. Do not use boiling hot water; the burn resulting from boiling water will often be worse than the lionfish sting. LionfishHunting.com offers several portable heat devices for treating stings here.

-A lionfish’s stomach can expand to 30 times its normal size! Lionfish have no known predators in the Atlantic and Caribbean. In lab studies, many native fish starve to death rather than attack a lionfish. In lab studies lionfish have been known to eat up to 8 times their body weight in a year.

-Lionfish reproduce sexually. When females find an area where the male Lion Fish can fertilize their eggs they will lay mucus-encapsulated clusters of 2,000 to 15,000 eggs so they can be fertilized. In the environment around the egg there are bacteria that will break down the mass mucus in the egg to help the hatching process. The egg will take up to 12 hours to be fertilized where it will hatch in around 36 hours. The new born lion fish become fine swimmers around two to three days after they have hatched, where they can then hunt and catch small plankton.

They have been spotted in water as little as 1 foot (.3m) deep to beyond 1,000 feet (305m) deep. They are equally at home in brackish water river estuaries and mangroves, where most of the juvenile fish grow up. Being able to tolerate water temperatures down to 50 degrees Fahrenheit (10 degrees Celsius) they have established a current range from Rhode Island, United States as far south as Brazil. They are highly tolerant to temperature change and biologically resistant to most diseases and parasites that affect native fish. When food is scarce due to temperature and climate, lionfish can live beyond 3 months without eating anything at all and lose very little body mass as a result.

Lionfish can live in excess of 15 years and have no natural predators in the Western Atlantic Ocean, Caribbean Sea or Gulf of Mexico that are capable of controlling the burgeoning lionfish population.

Just got back from...

There currently are 4 guests online.